SportsPulse: The Dodgers are headed back to the World Series for the third time in four years. Bob Nightengale explains why this may finally be the team that reaches the mountain top.

ARLINGTON, Texas — Cody Bellinger has always had plenty of pop. But after the biggest home run of his life, he’d just as soon avoid the pop that followed.

Bellinger made history Sunday night, becoming the first player to hit homers in two Game 7s of the National League Championship Series. And after he ripped a 2-2 pitch from Chris Martin into the right field stands at Globe Life Field, strutted down the first base line and exhorted his Los Angeles Dodgers teammates as he tallied the final run in a 4-3 victory, Bellinger got a little too exuberant.

He swung his right arm wide for a powerful forearm bash with teammate Kiké Hernandez.

A bit too powerful.

Bellinger dislocated his shoulder in the celebration, he told MLB Network, and retreated to the training room so it could be popped back into place.

“I hit Kiké’s shoulder a little too hard and my shoulder popped out,” Bellinger said. “They had to pop it back in so I could play defense. It kinda hurt.

“I’m going to maybe use my left arm (next time). I’ve never dislocated that one.”

Bellinger hurt himself in the celebration? pic.twitter.com/7or9FUUxla

Hernandez had a better explanation in a TV interview: “Now Belli knows not to mess with people who are way stronger than him.”

Bellinger won the 2018 NLCS MVP award and his Game 7 homer was a key in vanquishing the Milwaukee Brewers. This NLCS didn’t go quite so well – Bellinger finished it 5-for-24 (.208) with two home runs and nine strikeouts. 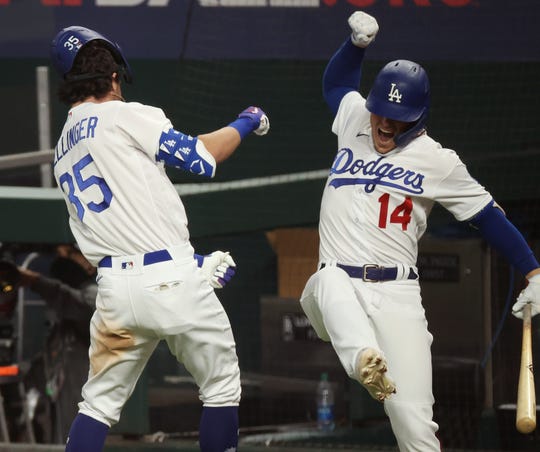 But he drew six walks, impressing his teammates with his plate discipline. His career has moved in decidedly non-linear fashion – from 2017 Rookie of the Year, to falling into a platoon role in 2018, to NL MVP in 2019 and then an uneven performance in this pandemic-shortened season – career lows in batting average (.239) and on-base percentage (.333).

Perhaps his Game 7 home run will signal another upward tick – with a championship on the line, no less.

“Cody’s as talented as any player in baseball,” manager Dave Roberts said, “but I think this postseason is showing him the value of controlling the strike zone, winning the pitches, taking the walk and if they make a mistake, you can still slug.”

Just be careful when you try to slug one of your teammates.

FMIA Week 11: Patrick Mahomes and the Moments Competitors Love; Alex Smith and the

A 5-story building in Shanghai ‘walks’ to a new location